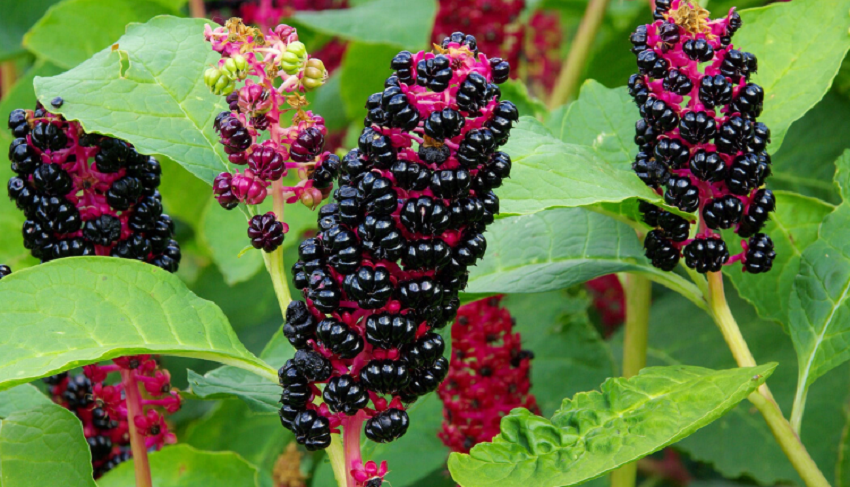 Pokeweed although considered as a toxic plant consumed in some areas of the United States, they are cooked according to popular recipes to eliminate poisonous components, the plant has also been used for healing purposes in folk medicine. It is part of a typical dish of some areas of the United States “Poke salad” in which its leaves and stems are used, its roots are not used, as they are very toxic. In some places, it is considered a weed as it invades other crops and is a danger to cattle due to its toxicity.

It is very dangerous for children, adults and pets, its toxicity is higher in adult specimens, all parts of the plant, leaves, roots and leaves, are toxic. Although it is native to the United States, it has been naturalized in many other places, growing frequently in roads and areas near forests. Although its toxicity is sometimes grown as an ornamental, it causes interest in the medical aspect due to its use in traditional medicine.

The plant grows in sunny or partially sunny situations and they are very resistant plants. They adapt to all types of soils as long as they are well drained, they can invade other crops competing with them for nutrients from the soil, weakening other plants close to it.

It is a very resistant plant usually does not have problems with pests and diseases; excess water or poor drainage can affect the plant causing rot. The intense cold and frost can kill the aerial part of the plant, but it sprouts again in spring from the root, it can even survive fires if its roots are not damaged. It is a difficult plant to eradicate.