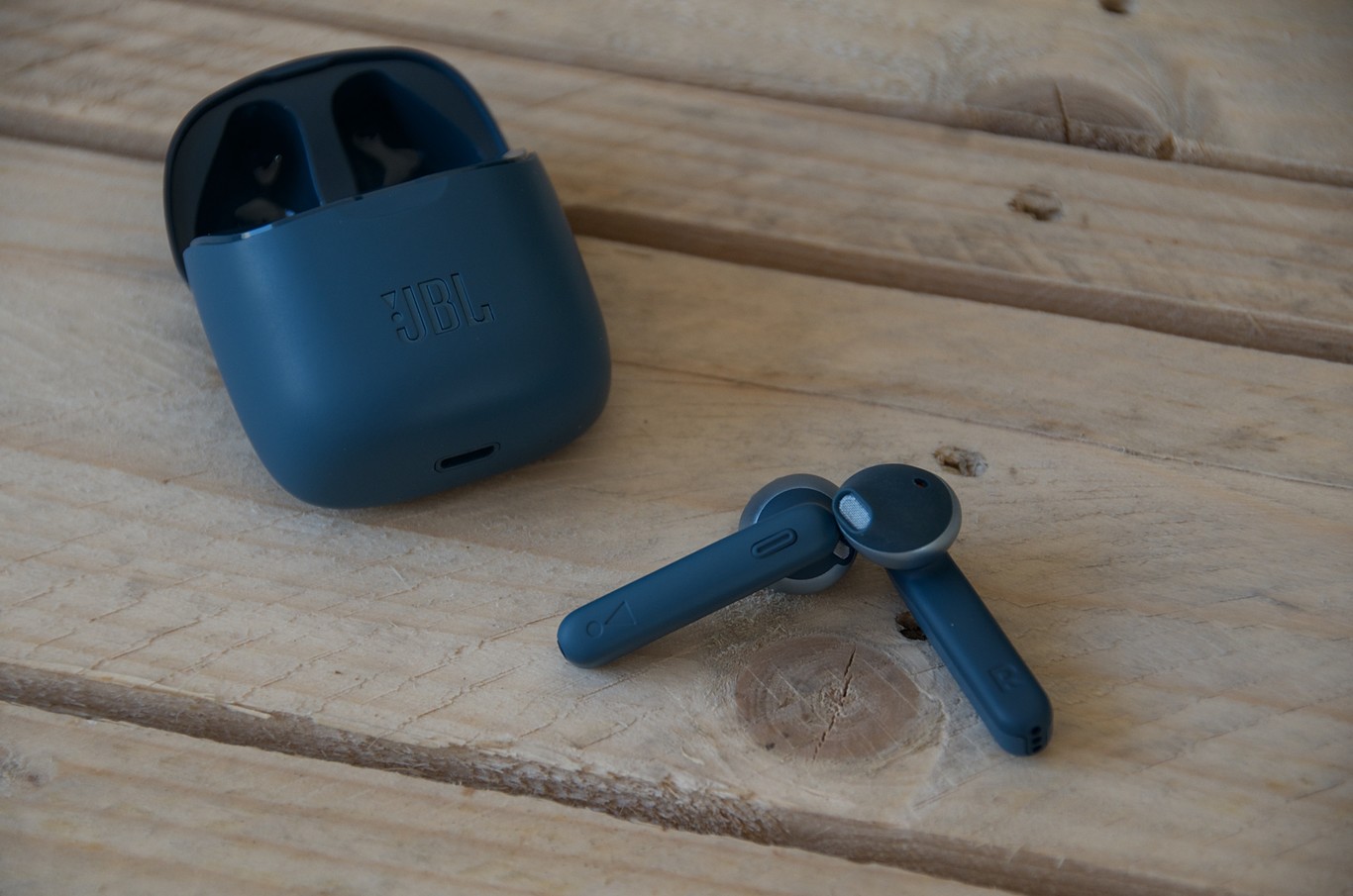 JBL, with a large market among the younger public, does not want to be left behind in the business of fashionable wireless headphones and among its wide catalog of models, the JBL Tune 220 TWS stand out for their price below 100 euros and a casual design.

Design away from the “classic”

Finding something different in the wireless charging box headphone market is not easy. JBL tries it based on more robust finishes, colors and a somewhat different design than usual in this segment.

The JBL Tune 220 TWS are fairly stiff in-ear headphones in design and come of course with a matching carrying and charging case. Although the first impression as soon as they were removed from the box was not very positive, during use they have shown that they are very comfortable with their universal design. They are also very light.

The grip of the headphones is quite solid and does not leave us with the feeling of being able to lose them easily, although it is a personal matter and will depend on the anatomy of each user. In any case, although you can do some exercise with them, it is not recommended, among other reasons because despite their more casual design, they do not offer any certified resistance to sweat, water or dust.

The new JBL headphones do not include tactile elements but a tiny physical control with some relief, easily locatable and that, depending on the earpiece in which we press it, performs one action and another.

We can, for example, press the right button to pause the active playback (another tap resumes the playback) or with two consecutive clicks, activate the default virtual assistant of our smartphone or use the hands free. If we do the same with the left earphone, one touch advances the track and two reverses.

One functionality that we expected from these headphones but has been overlooked is the inclusion of a sensor that detects when we remove an earphone to pause active playback. Neither does it happen when we both retire, the pause only occurs when we put the headphones back in the box and the pairing with the phone is canceled.

The JBL Tune 220 TWS charging case is one of the most different we have found on the market despite the fact that it does not really go too far from the design line of these elements. It is somewhat more voluminous than other solutions already discussed, but it is light and feels very robust.

The finish is matte, unpolished, more youthful and casual, but I like it. Comes with the color of the headphones and the lid can be opened with one hand in a very comfortable way. It also remains open even without the cover on the table.

The interior of the JBL Tune 220 TWS case is very simple. There are two color indicators on the left and right ear cups, but these are screen prints on the plastic. It does include LEDs for the battery charge indicator on the case. They are three white LEDs that stay lit all the time when the box remains open.

An interesting detail of this JBL box is that the headphones are attached with magnets to the cargo area and remain there even if we overturn the box, preventing them from falling by accident.

As for the charging system of the box, it is via microUSB, a somewhat anachronistic element in the current smartphone market.

Something surprising when using the JBL Tune 220 TWS headphones for the first time is the absence of a sync button on the box. A functionality has assimilated as a way of synchronization with many headphones of this type that comes in a charging and transport box.

But the JBL Tune 220 TWS want to be different even in this regard. With no visible indication, the pairing method for the first time or with new equipment is classic but using a small button located directly on the earpiece.

The right earbud is the one recommended for pairing. After achieving this, the system is responsible for doing the same with the left.

The process is relatively fast. Just press the sync button for a couple of seconds and in many others, the JBL Tune 220 TWS are paired. There is quite powerful sound to warn us.

After the first synchronization, the subsequent pairing occurs with some delay if we only put on a headset, in the order of about 10 seconds, which seemed to me a big wait. The same happens with the unpairing after removing the headphones.

If after opening the box we put on both headphones, the synchronization only requires a couple of seconds of waiting, in tune with other similar headphones that we have tested previously.

We come to the interesting and most relevant part of any wireless headset: sound quality. Here it must be said that the JBL tune 220 TWS are faithful products of the brand and its focus is clearly on the younger audience and for whom a boost of low frequencies is an added value.

The sound of the JBL Tune 220 TWS wireless headphones prioritizes the presence of those bass and a good part of the mids over the highs, something that is easily appreciated when listening to various songs.

In addition, it should be noted that the sound level is not especially high, so together with the fact that they are headphones without any isolation from the external sound, it means that we must have the general volume high enough to avoid problems when listening to the sound of scenes from series, podcasts or movies.

With music the situation changes and the problem of the sound level is less, although it continues to sin from that final lack of sound power.

JBL announces a total autonomy of 19 hours for its Tune 220 TWS headphones. This is the total battery life of the headphones plus the possible charges provided by the transport box.

In theory, each full charge of the headphones should provide around 3 hours of autonomy, but in our tests, before asking us to put them back in the box, the average was between 2.15 and 2.30 hours, with preferred use of listening music and podcasts.

That autonomy is somewhat fair but it is complemented by the charging of the box, quite fast and that gives about 5-6 more full charges. In the end, the JBL Tune 220 TWS, which we will always carry in their transport box, have offered us about 14-15 hours of real autonomy.