We don’t tend to think much of planes anymore. They have become such a part of our lives that they have ceased to be as wondrous as they once were. It’s easy to forget just what an incredible achievement flight was and the impact it has had on humanity. The fact that we can keep a fully loaded jumbo in the air to travel across the globe is a truly amazing feat. The engineering and design involved is a massive testament to the ingenuity of the human mind and in that design, every single component plays a vital role.

There is no such thing as an unimportant plane part and one of the most commonly used materials for these parts is rubber. Rubber plays a significant role in the construction of all aircraft. Sealing is probably the most important process that rubber serves on an aircraft and this is achieved using gaskets and seals. These help to prevent leakage of gas or fluids, maintain temperatures and control pressure levels. A large part of a plane’s operating systems rely on rubber seals and gaskets for their functioning.

One of the most significant examples of this is the pressurisation of the aircraft’s cabin, without which breathing would be very difficult. This is obviously essential for the health of the crew and passengers, as well as helping to keep the plane in the air. The air pressure system relies heavily on gaskets and seals and if these were to fail, it would lead to a loss of consciousness and eventually death to those on board!

Another key area where rubber assists in safety and aerodynamics is dealing with ice on the wings that can seriously impact a plane’s ability to achieve lift. De-icing boots are fitted for this very reason to ensure that the freezing temperatures experienced at high altitude do not negatively affect the aircraft. De-icing boots are commonly made from rubber that have the ability to expand with air when thick ice forms. As they expand, the ice cracks and blows away, leaving the wings ice-free. 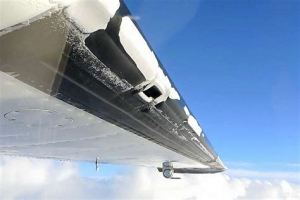 Passenger comfort also makes use of rubber components. Much of the interior seating contains rubber as it is easy to maintain and is highly resistant to wear and tear. Many other interior items contain rubber, including meal trays and cockpit ladders, for example.

Rubber is also a key part of the ground crew’s equipment, from rubber boots and gloves to gaiters, repair kits and sealants that are required for aircraft safety each time a plane lands. Rubber’s qualities and properties are perfectly suited to the aerospace industry as it offers strength, flexibility, environmental resistance, the ability to withstand extreme temperatures and good resistance to abrasion.